2020 Wedding Etiquette:
How to Address Your Invitations

Let’s talk envelope etiquette! It’s 2020 people, there are options. You can take the traditional path and follow the Emily Post guidelines. You can play it safe and skip titles, which makes it less formal. Or have some fun with it.

Working in the wedding business, we know addressing envelopes can be a somewhat contentious debate between couples and their parents. Or perhaps, others are just confused about “what is protocol!” In our viewpoint, there are some traditional approaches and some more modern-day approaches. We do BOTH based on the couple's preference. You can choose to be more formal or embrace the changing landscape of our world. But whatever you choose, don’t let this be a pain point or cause unneeded wedding planning stress.

We’ve broken down the variety of options for addressing your envelopes below! And mega bonus: You can download our wedding calligraphy addressing template to start working on your own list!

Traditionally for married couples, you include the male’s first and last name (i.e. Mr. and Mrs. Kenneth Arendt). It's likely the most familiar and the most common way to address envelopes. Note: This etiquette rule is only applicable for married couples with the same last name.

What we don’t like: Why does the woman not get her name mentioned? Why is she Mrs. Kenneth Arendt? See alternate option below. 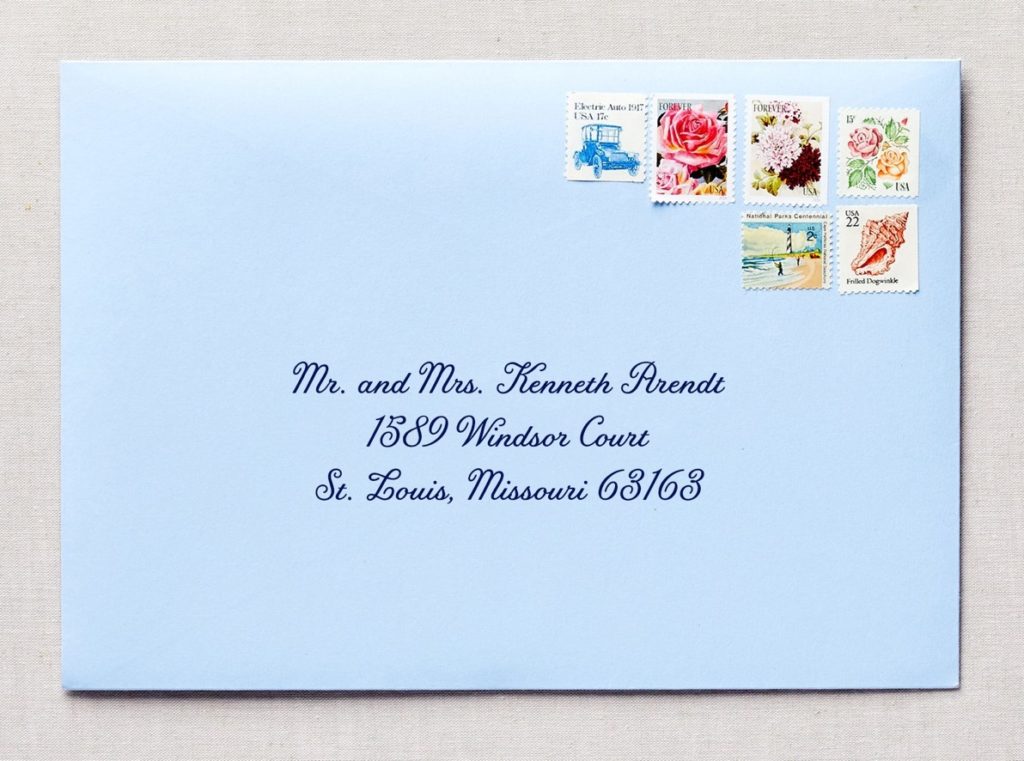 For a less traditional spin, remove titles and include both first names and joint last name! Note: Ladies first! Why? We still like the etiquette rule of not separating the male's first and last name.

Also, you don’t have to spell out your guest's full birth name (i.e. Kenneth Arendt versus Ken Arendt) if they never use that name in every day life. But this is totally your preference based on your relationship or level of formality preference. 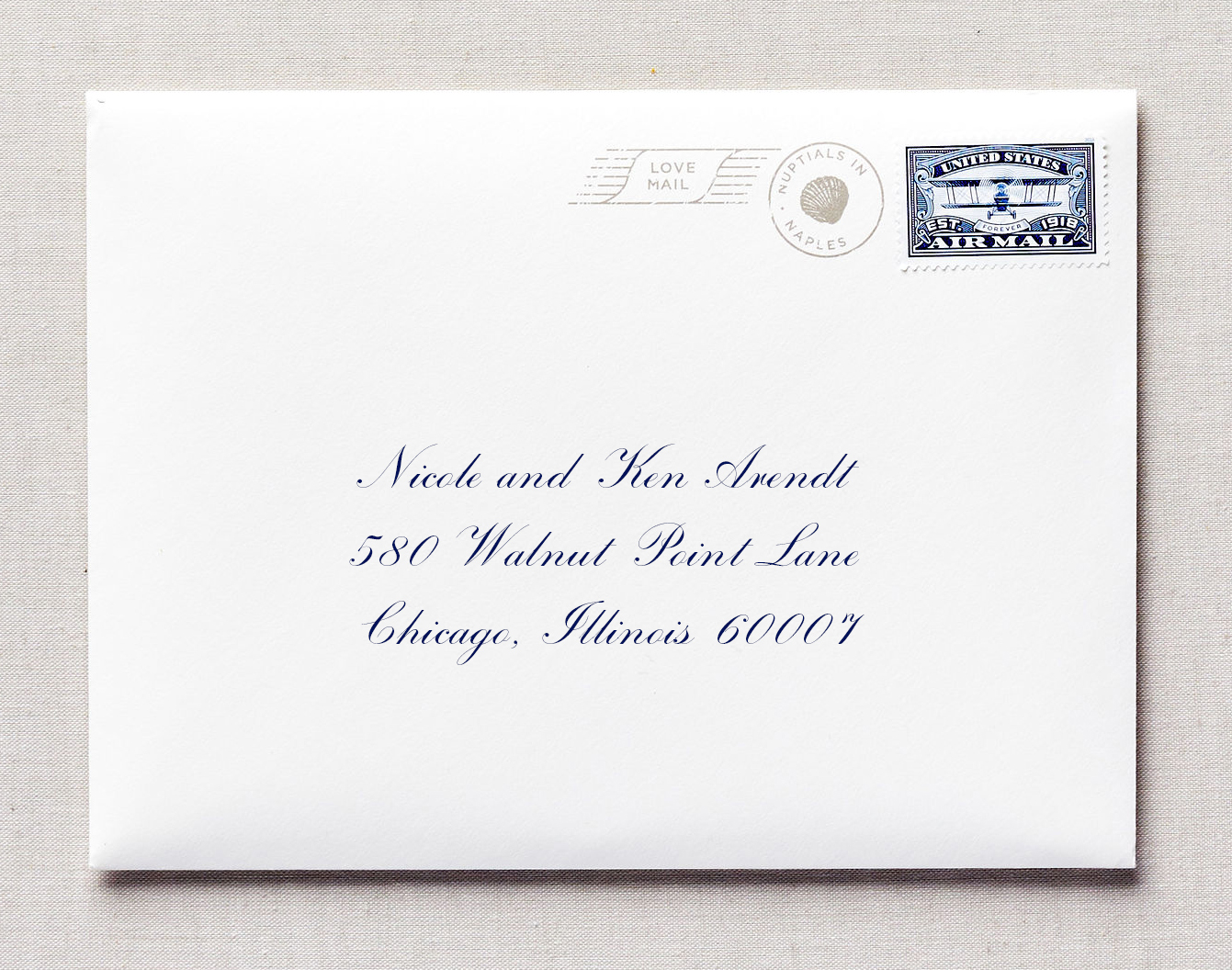 All singles ladies can use either Ms. or Miss. But we think it’s more appropriate for the crowd over 20 to go as Ms.

And for married ladies, you also have two options, Mrs. of course, but Ms. can be used for both unmarried and married women. We prefer Ms. as it doesn’t identify a woman by her marital status.

If the married couple has different last names, list each full name with an AND between names to indicate marriage. 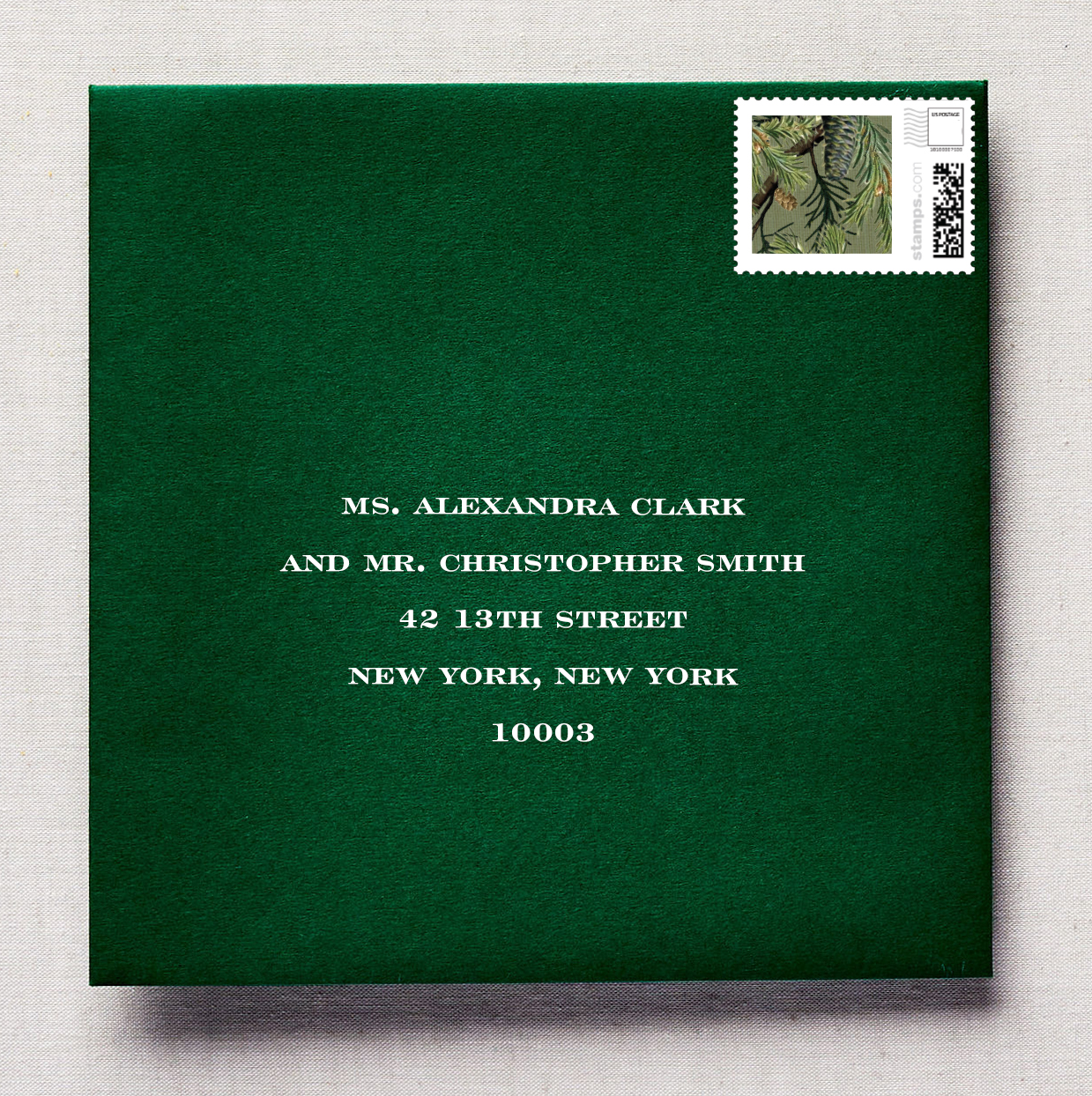 If the same-sex couple is married but with different last names, include both their first and last names combined with an AND. Opt to add their desired prefix in front of the name (Mr. or Ms.) for more formality. 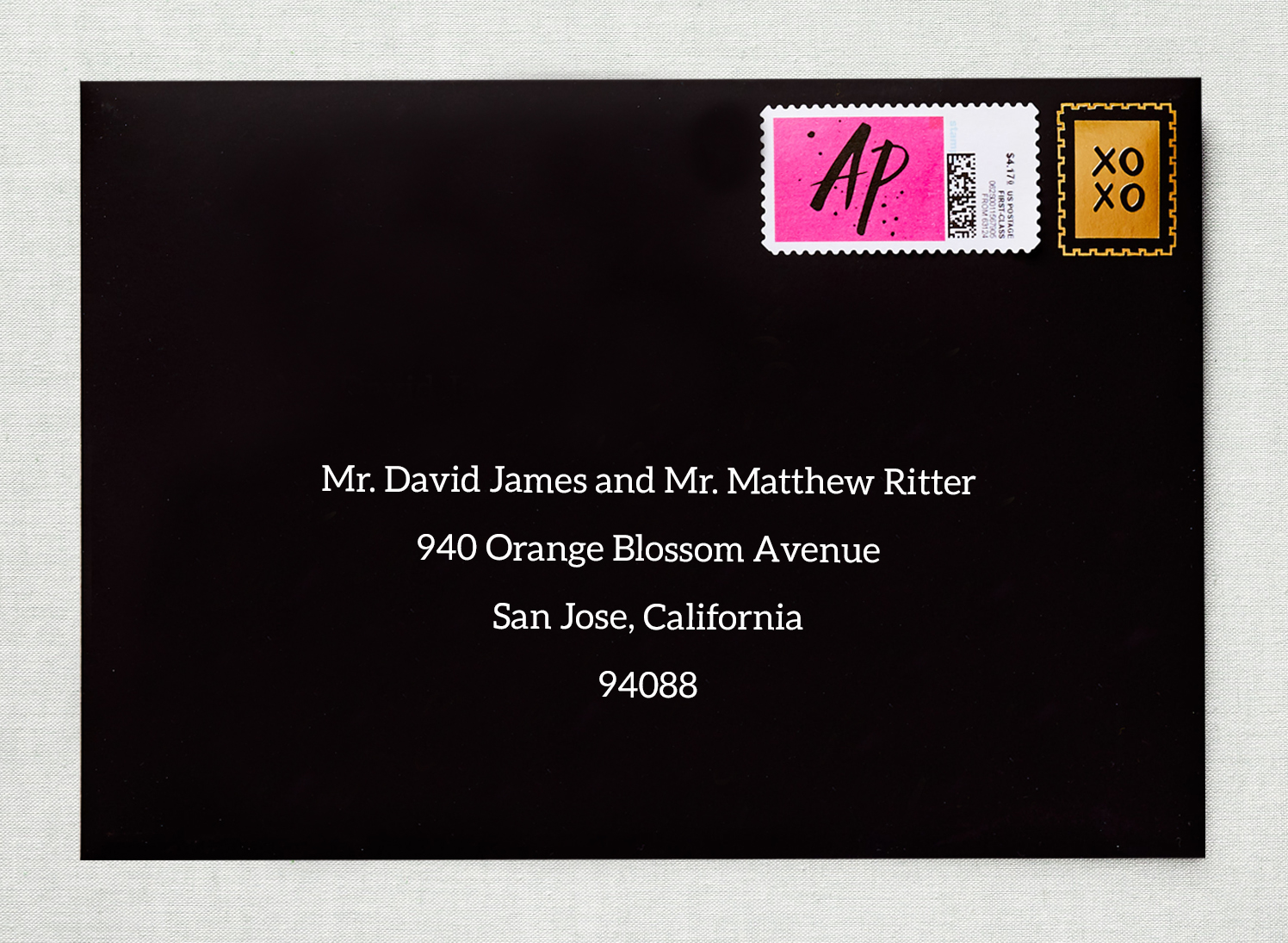 If the same-sex couple is married and has adopted one last name, include both first and last names.

Who goes first? We recommend placing the names in alpha order based on their first name.  Then, make sure to include the AND to show that they are married.

You can also have the order of names based on who you know better. 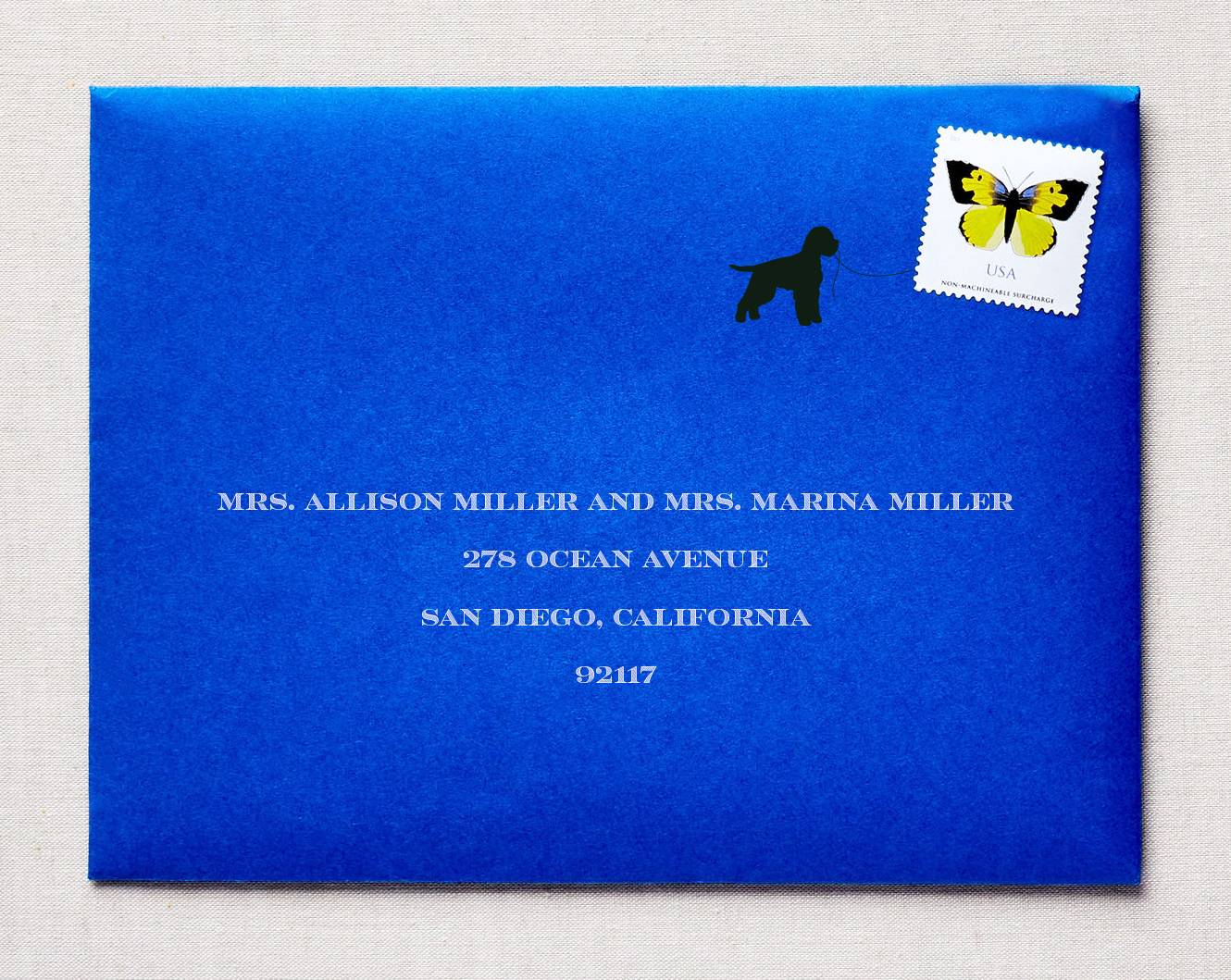 Not Married, Living Together:

If the couple is not married but is living together, place them on two different lines. This indicates that they are not legally married. That being said, use your judgment. Ten+ years of living together deserves an AND! 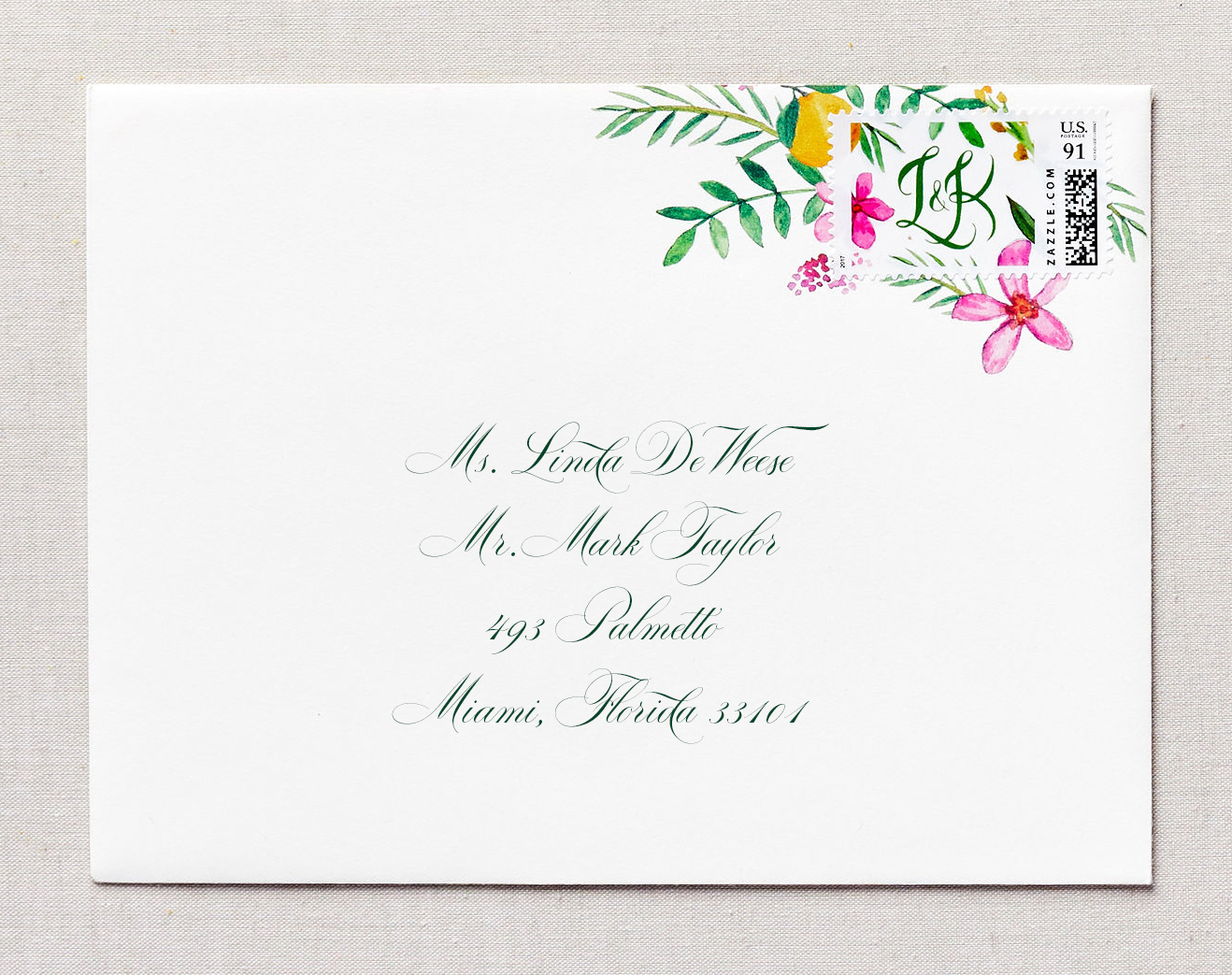 If you are asking your friend to include a guest, you need to make sure to include it on the outer or inner envelope. Best practice is to learn the guest’s name before invitations are mailed and include this on the envelope.

If you are including an inner envelope, “& Guest”  or “and Guest” would be placed on the inner envelope not on the outer envelope. Whether or not you spell out “and" is based on your stylistic preferences.

(Note, you don’t have to include “and Guest” on the save the date as relationships do change throughout the course of the year!)

We have found that some couples believe it is standard protocol to always allow a guest, no matter how long the relationship. However, it really depends on your individual budget, preferences and relationship with the person that you are inviting. If they have a few friends already planning on attending the wedding, they might not need a guest to feel comfortable! Also, remember lots of love connections happen at weddings so going solo can have benefits! 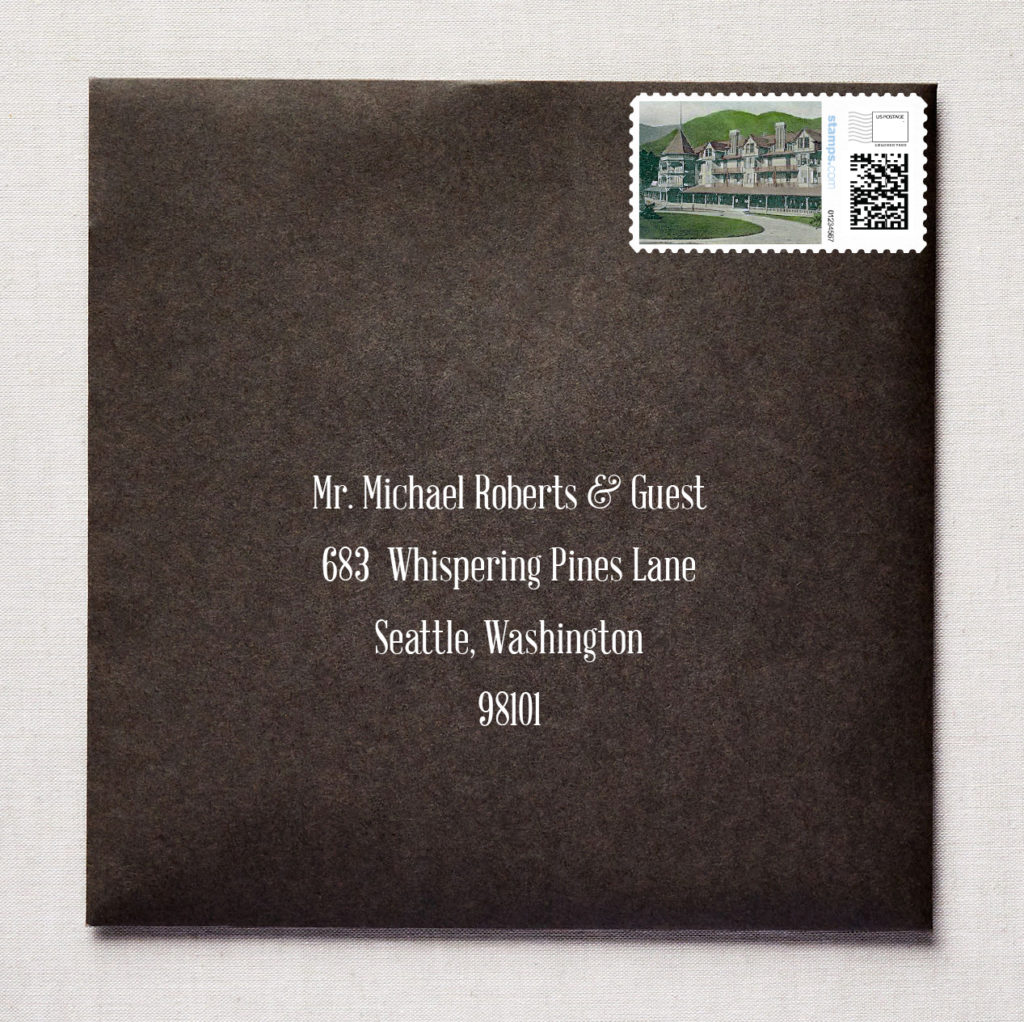 For a married male doctor, address the invite as shown below:

For a married female doctor, list the female first as shown below. Her name would then be followed by her husband's title and first and last name. 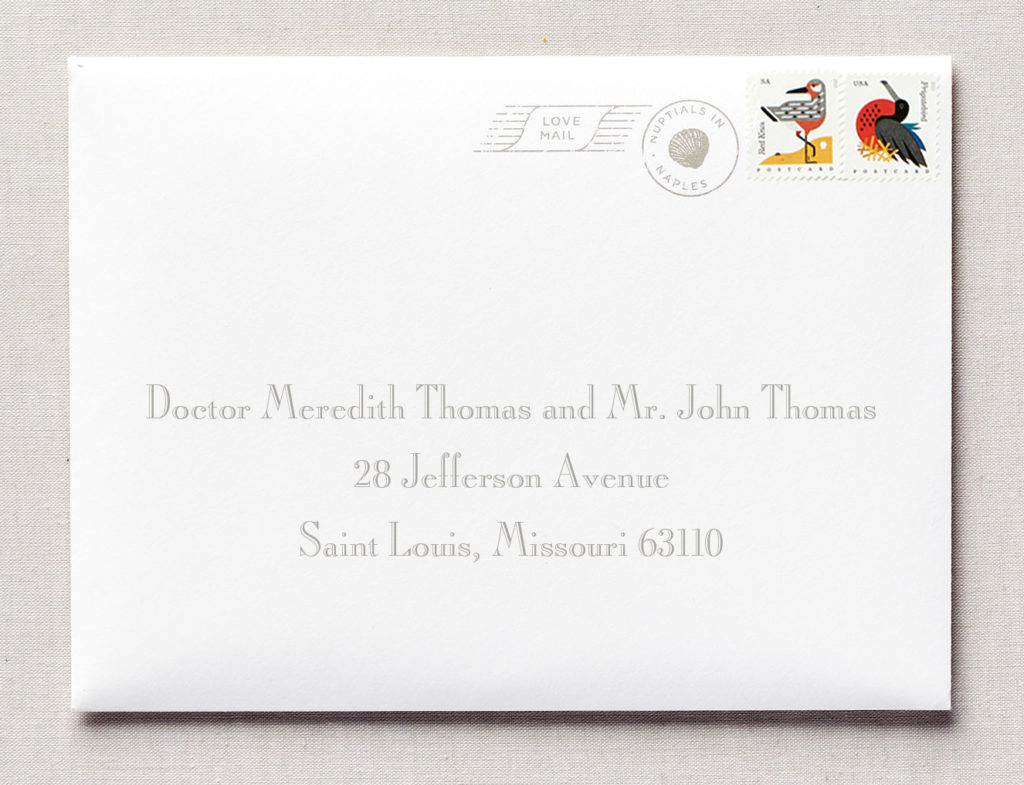 If both are doctors with the same last name, address the envelope to “The Doctors” and their last name.

There are a few ways to address the family based on your formality preference and whether or not you are using an inner envelope. Options here:

If using only an outer envelope:

Address the invite to “ The Armstrong Family.”  This implies that you will be inviting the whole family and that all family members (children included) are invited to both the ceremony and reception. 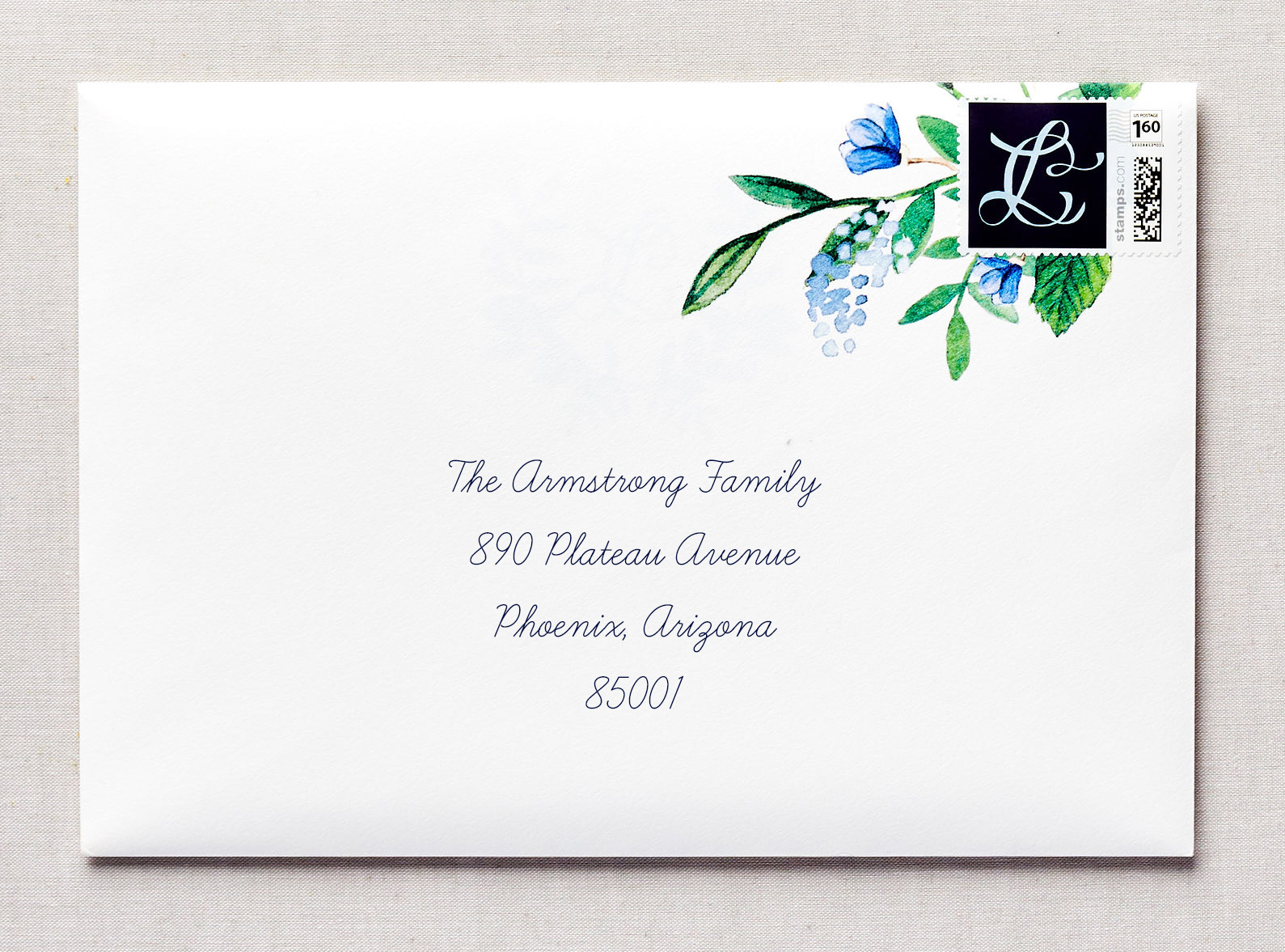 If using an outer and an inner envelope!

You only need to address the adults on the outer mailing envelope. Then, utilize your inner envelope to spell out exactly who is invited.

On the inner envelope, include the name of the parents with the children listed below. The formal Emily Post etiquette suggests using “Miss” for young girls and “Master” for boys under the age of thirteen. 🤔

For a less formal spin, don't include titles or last names and embrace nicknames.

Mixing It Up a Bit: Nicknames!

Now for the fun. This is where nicknames, terms of endearment and inside jokes can be used for a more personal, playful spin. With a fun nickname like Goose, who wouldn’t want to add it?

Note, we find that most people add nicknames on inner envelopes versus outer envelopes. But, it is your preference!

Have a loving name for your grandma or grandpa? Add it! 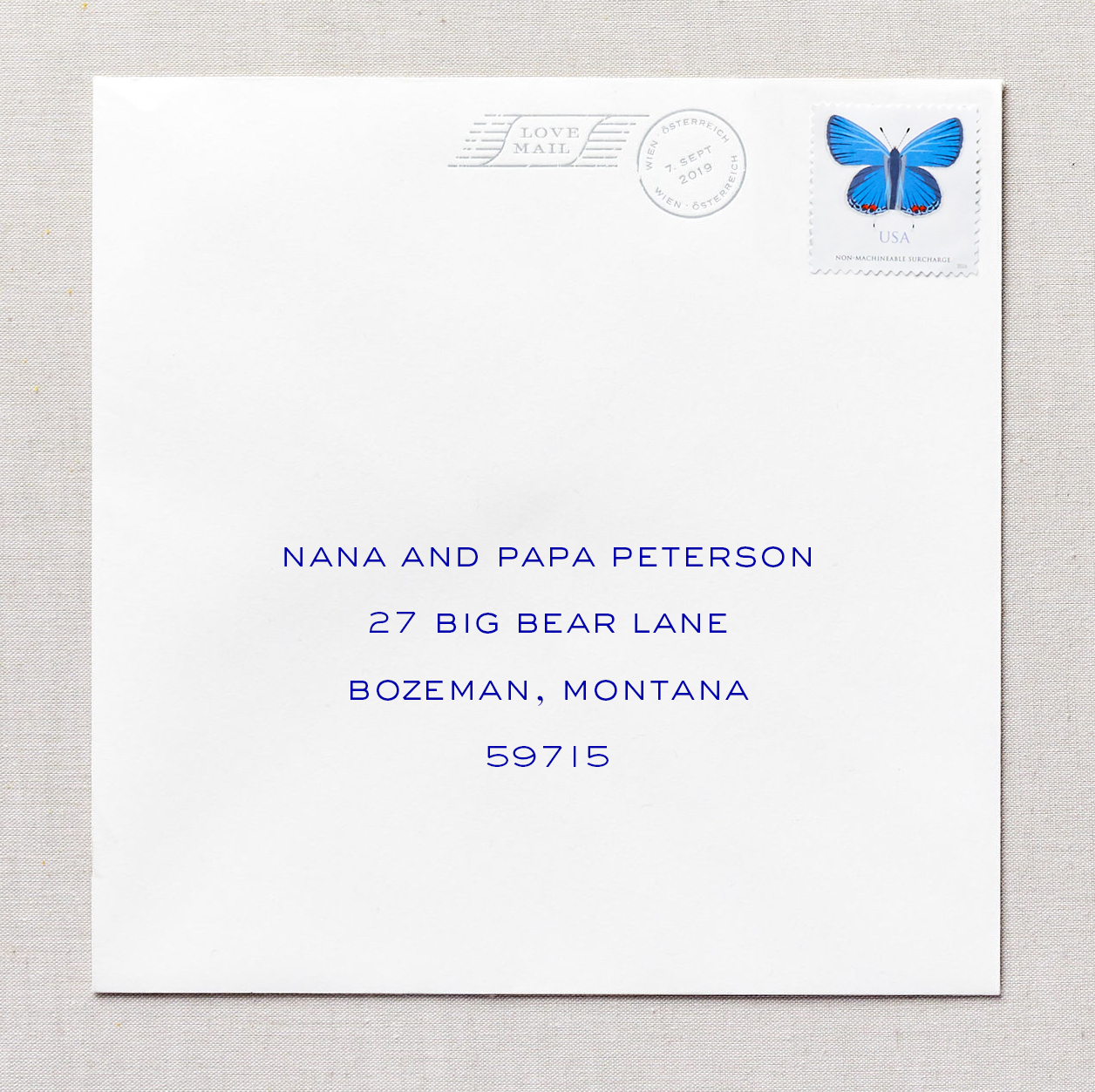 We don’t claim to be etiquette experts, but with more than 1,000+ invitations designed, we’ve seen a lot envelopes pass through our hands.  And we like to go by the rules or break them as long as the envelope reaches the intended party for your big party, your wedding!

And once again, as an added bonus, to keep your wedding list together, download our easy Excel wedding invitation addressing template below. It’s a great resource to capture all your guests and their addresses in one place! It also gives you more addressing helpful hints. Happy addressing! 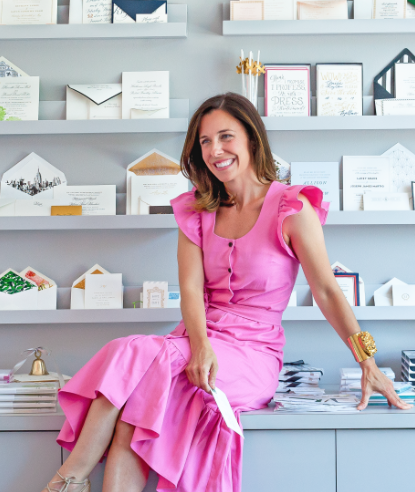 Welcome to the blog of Cheree Berry Paper, a graphic design and stationery company that specializes in custom design and unique details. This is our longergram. Our written collection of inspiration, imagination, details and surprises. Consider this an electronic handwritten letter to keep in touch with you.

Keep up with us